Finding the best car cooler for an upcoming road trip, camping adventure or general travel in your car can be a bit difficult with all the options online. What sets a car cooler box apart from a regular ice chest or freezer is that it is electrically powered by your cars 12V power source, usually via the cigarette adapter port.

The Igloo Iceless Thermoelectric Cooler is 18.19″ L x 13.13″ W x 15.5″ D and can hold up to 24.5 liters. It cools up to 36 degrees below the outside temperature, which can work well in cold climates, but in warmer places it might not make the cut. Definitely do not store easily perishable things in this fridge like meat or dairy unless you’re using additional ice packs. It has an 8-foot long power cord that plugs into any 12V DC outlet (like a cigarette lighter). 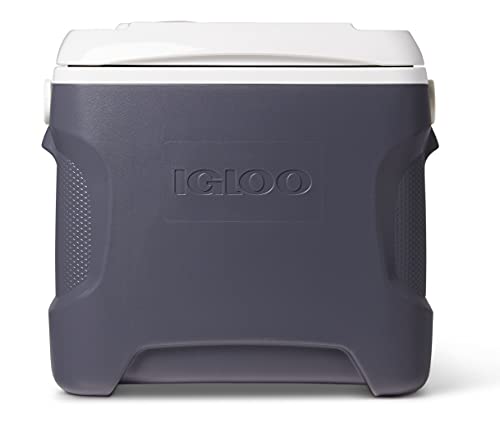 3,995 Reviews
Features and Pricing for the Electric Igloo Car Cooler
$118.85
View On Amazon

The motor is quiet and doesn’t give off much heat, but be sure to not place anything on top of or around the unit so it doesn’t obstruct the motor. It also takes several hours to get significantly cool, so some people will plug it in before they leave in order to make sure the unit is cold before a trip. While there have been some reports of the cord getting too hot and melting, this cooler has a 1 year warranty, so if it does melt you can just return it for a new cord. Even though this cooler is on the smaller side when compared to other coolers, this means that it can still fit a considerable amount inside while being able to place it on a car seat or on the floor. Its smaller size also means that it takes less time to cool down and will not heat up as fast as bigger coolers. Overall, this cooler is on the cheap side but still works well.

The Dometic line of electric coolers are definitely one of the priciest out there, they can truly act as a substitute for a refrigerator. The CFX35W cools down to -7 degrees F. It’s 27.2″ L x 15.7″ W x 16.2″ D with reinforced corners and a strong closing mechanism to make sure that there are no leaks. It’s about two thirds the size of a regular cooler but the lack of ice makes storing things much more convenient.

The cooler comes with a companion smartphone app to change the temperature remotely and it has a 2 year warranty. This cooler is definitely more reliable than a traditional cooler with ice and can be used for perishables in an outdoor environment, as long as it is cooled down properly beforehand. If you’ll be in an especially warm or unfavorable climate, there is an insulation hood that’s sold separately and helps the cooler run more smoothly in tougher weather. Some people report the cooler working just fine without the hood while some noticed a significant improvement with the hood, so it’s really just up to the environment in which you will be using it. Overall, while this cooler does its job very well and has a few novel features, the price tag is enough to make some people pass it by. The two year warranty is enticing, but unless you are depending on the cooler to keep perishables a certain temperature, then it might not be worth the money.

The Wagan 14L Electric Cooler is 19″ x 10.25″ x 12″. This makes it one of the smaller coolers on the market but it still holds a 12 pack of soda cans and regular sized water bottles. It also has a few cup holders outside of the cooler, but the things you put in them will not get refrigerated or heated. 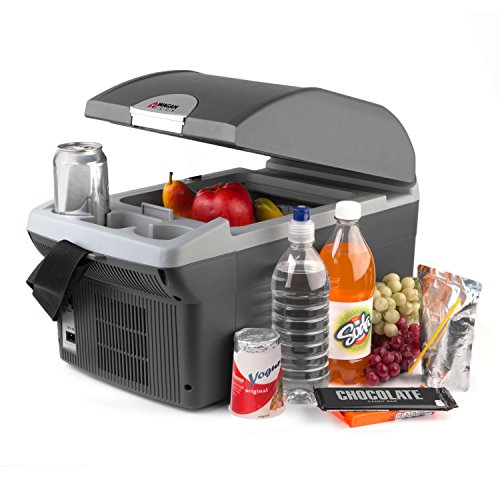 One of the unique benefits to this device is that it is not only a cooler, but also a heater. It can cool things to as low as 36 degrees F below the room temperature and it can heat things to as hot as 140 degrees F. One important thing to note about this cooler is that it only has a hot/cold switch so you can’t set the temperature to an exact amount. The good thing about these temperatures is that it prevents your food from freezing and your plastic from melting in the cooler. As usual, this cooler works better when the items inside are already at the temperature you want them to stay at, so don’t put things in to be frozen. It’s designed for use in a car and comes with a plug to fit into your car’s cigarette lighter, but it can also be used in a regular AC adapter if you buy the original plug. While it is darker to blend in with your car’s interior, it has a carrying strap too so you can take it out of your car and carry it to where you’re going.

The Coleman 40-Quart (38 Liter) Portable Cooler is 23.5″ x 17″ x 15.3″. It is quite large when compared to other coolers on the market so you can fit more in it. This cooler can fit up to 44 cans and is designed to be portable. It keeps things up to 40 degrees F cooler than the outside temperature. 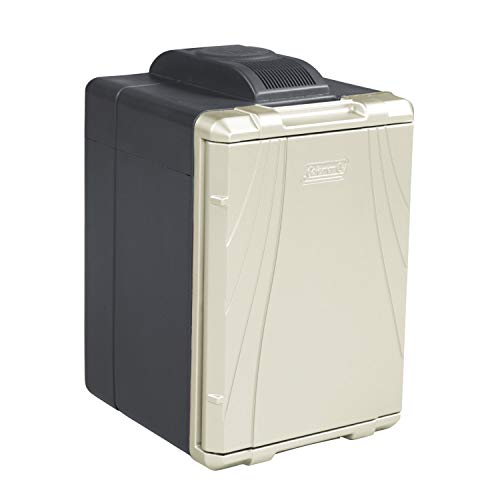 While some cars might not be big enough to store it in the cabin, it does fit inside most trunks. It looks like a mini fridge because it comes with a storage tray to organize the contents and has a convertible door that opens from the right or left side for convenience. One thing to remember when having a bigger cooler is that it depends on a vent in order to keep things cool. Do not block this vent, otherwise it will overheat. Also, do not add ice because it can get into the fan and kill the motor. Refrigerate things ahead of time and then put it in the electric cooler. There are several reports of people blowing fuses and coolers dying prematurely, but they were mostly using them in very warm temperatures and not cooling them down prior to putting them in the car, which is recommended to keep things cooler for longer. While this cooler is more expensive than some other coolers out there, it works just as well and can fit much more than the smaller coolers. This is a great option for someone who wants a less portable cooler for a lot of perishable items.

The COSTWAY Chest Freezer and Fridge is 24.5″ x 20″ x 22″ and is more of a freezer than other thermoelectric coolers. The freezer itself has three different settings so you can cool it down to as far as -0.4 degrees F and as high as 50 degrees F to save battery life. It also has a removable basket to store things more efficiently. 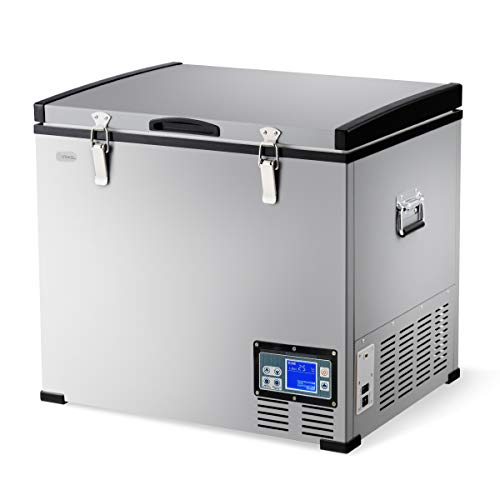 It stores up to 63 quarts or 60 liters, making it one of the largest electric coolers on the market. The cooler itself has a light-up LCD screen to change the temperature, but unfortunately, you can only have it set to one temperature at a time since the whole cooler is connected. Since this cooler is one of the larger coolers out there, it’s not really something you would take with you in a car. A large truck or RV might be okay, but the amount of time it takes to move in and out might be too cumbersome. This cooler does use battery power efficiently though by turning on and off again to maintain its temperature and it is less draining on your battery than other coolers. Most people say that it takes as little as twenty minutes to cool down the fridge once they plug it in for the first time. Coolers like these are much more heavy duty and more expensive than other coolers, but this brand is pretty cost effective and usually costs around half as much as products from other brands that do a similar job.