If you’re looking for an ebike that does not have any pedals (not a scooter), we have put together a list of the best rated electric bikes with no pedals for 2021 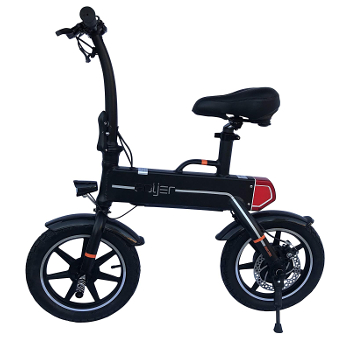 The iFreego Mini Adult Electric Bike is one of the more lightweight Electric Bike options. Weighing in at 27 pounds, it has unusually large wheels for its weight, which makes for a smoother ride on uneven terrain. It can operate for up to 20 miles without a charge and its speed clocks in at a max of 19 mph, which is a lot for electric bikes like this one. It has a max climbing angle of 30 degrees to handle some pretty steep inclines. This bicycle is a good companion to have while camping or traveling due to its small size and capabilities. Soljer, the manufacturer of the iFreego, boasts that the company is located in the USA and uses higher quality materials for a better experience. This electric bicycle has a handle to carry it, which makes it easy to carry and load into cars to transport.

Even though this bike has a lot to offer, there are some drawbacks as well. The main complaint is the lack of cruise control, but when you’re only going 20 miles an hour this shouldn’t be an issue for most. It’s also a good idea to wear bright clothing at night or add additional lights if you’re riding at night because the lights are somewhat dim. Overall though, this bicycle is a solid choice and serves its purpose well. 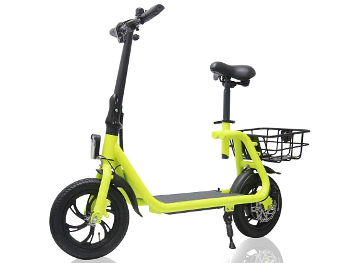 Similar to its lime green color, the Beston Sports Mini Electric Bike stands out from other electric no-pedal bikes on the market. This bicycle supports up to 265 pounds, goes as fast as 15 mph, and can travel as far as 9 miles before recharging. It comes with 12-inch tires that make for a secure and stable ride. Unlike other electric bicycles, this one has a foot rest that’s wide for easy riding as opposed to footrests where the pedals should be. It only has a 7.2 degree climbing angle, so this bicycle is only really good for flat and even roads.

This bike also has a few safety features that other bikes don’t have, like a horn for dense urban environments and a headlight. Its bright green color makes your bike easy to spot, which is helpful for other drivers in dark areas. It also has a basket attached to the back like a non-electric bike that can bring whatever you need to your destination. While this bike doesn’t have the best speed or battery life, it has a good weight limit and safety features, making it an especially great option for those living in cities and places with even roads. 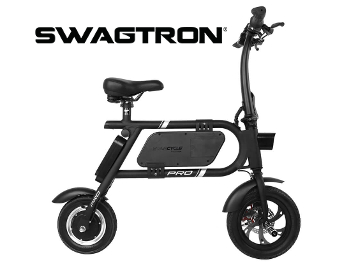 The SwagCycle Pro is an upgrade in both speed and distance from the original SwagCycle, letting you move at up to 18 mph and travel up to 15 miles before a charge. It has a dual brake lever, which means that one lever break will stop both wheels at the same time. This version also has a companion smartphone app that lets you see how far you’ve traveled, your current speed, and GPS functionality. You can plug your phone into the SwagCycle to charge it in case the app drains your battery, but this will drain the bicycle’s battery as well.

While this bicycle is a powerhouse, it can’t travel on as much uneven terrain as other bikes due to its small wheels. Its max climbing angle is 12 degrees, which should be fine for most flat ground but might not be suitable for more hilly rides. Like most other faster bikes, this one also does not have cruise control, but with a max speed of 18 mph, cruise control is almost unnecessary. One important thing to note is that the seat is not adjustable, so if you’re exceptionally tall or short you might want to go with a different bicycle to adjust the seat. 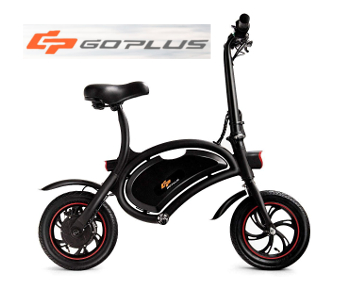 The Goplus Folding Electric Bicycle has a speed limit of 12 mph and allows you to ride as far as 13 miles without a charge. Although it operates at a considerably slower speed than other electric no-pedal bikes on the market, this bicycle has a cruise control feature that saves battery life, which helps extend the amount of time you can use it before a charge. This bicycle has a companion app that not only tells you statistics about your speed and bike, but it also lets you change certain bicycle settings from the app, like changing the speed during cruise control and locking and unlocking your bike, which lets you leave your bike outside.

You can also carry your Goplus bike inside with you due to its folding bike head and convenient carrying handle. The bike boasts a 12-inch shock absorbent tire which helps the tires gain traction. This allows for more control and the ability to stop quickly. This makes the bike rideable during rainy weather, but it’s not recommended to use this bike on uneven or grassy terrain.If you’re willing to sacrifice speed and battery life for cruise control and portability, the Goplus Folding Bike is a great option. 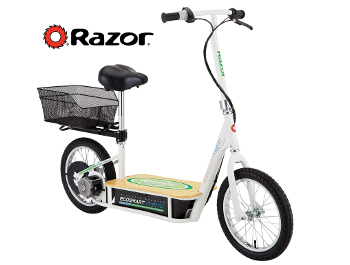 Razor, the brand famous for its line of kick scooters, has now released an electric version. Instead of kicking or pedaling, the user sits and lets the scooter do the work for them. This scooter can go up to 18 mph and allows for up to 40 minutes of use before recharging the battery. The tires on this scooter are quite large and are good for going fast distances and crossing uneven terrain. Coupled with a 500W motor, this scooter is quite high-powered. It also comes with a removable luggage rack and basket to carry supplies for school, work, or other needs.

There are some downsides to this scooter you may want to consider as well. This scooter has a weight limit of 220 pounds, which is considerably less than other scooters. It runs for considerably less time than other electric bicycles and scooters before needing a charge, and the charge time is unusually long, requiring up to 12 hours for the batteries to completely recharge again. Definitely consider this if you need this scooter for a daily commute. While this scooter definitely has some shortcomings, there are a lot of good things to it as well, namely its speed and power. It’s definitely a convenient option to consider if you need to take short trips.